S﻿﻿tephen Bennett bought his first 35mm camera in 1973. Soon a string of prize winning exhibition prints inspired him to take photography seriously, and his fishing, sailing and camping photos, with articles written around them, began to sell consistently to magazines within three years. The rest as they say is history and my work has been published in many magazines and books in Australia and overseas including the USA, ﻿﻿Germany and South Africa.

I have pursued many styles, genres and subject matter over the last thirty five or so years, but my specialties have always been in ﻿﻿ Glamour, Portraiture and Model/Actor Portfolio Photography﻿﻿, and Stock Photography of natural history and wildlife, and outdoor recreation.

My interest in film and video also began early on, (back when 16mm and super 8 were the norm) and my motion work has appeared in Australian television news and documentary programs over many years.

Having been based in both Newcastle and Sydney for far too long, I now live on the more relaxing Central Coast of New South Wales, with The Lady Marian.
My ever faithful Golden Retriever, Bodhi, passed away in 2015, but still remains my inspiration. 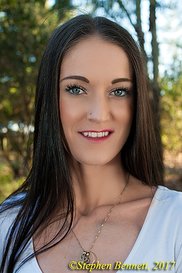 Stephen Bennett Photography and Video would like to welcome Ms. LUCY SCOTT to the newly created position of Creative Director.

Lucy is an accomplished model, make up and hair tech, with a flair for management and organization, and her ongoing role is to help recruit new models, and assist them through their first shoots with us, with makeup, hair styles, clothing choice, posing advice, hair, nail and skin care, and in general making certain that every girl who is following her dream has the best, most relaxing, enjoyable, but most importantly useful introduction to modelling possible.

Ongoing support, and up to date, accurate information for models wishing to build their career, without wasting time and effort on false hopes, pretenders and dead-ends will always be available as usual.
﻿
﻿﻿﻿﻿﻿Testimonials:﻿﻿﻿﻿﻿﻿

Thanks so much Stephen - I was an absolute green 'newbie' when I was fortunate and privileged enough to have met you. A blank canvas with stars in her eyes eager to learn with such high aspirations of entering the modelling industry. I thought it was going to be so easy.
I am extremely indebted to you for the knowledge and experience you imparted which stayed with me throughout my time, in every assignment I took part in - without it I would have definitely floundered. The ease in which you form a connection with others to achieve a fantastic outcome is sadly lacking with a number of photographers out there, as I soon found out very quickly, and I am extremely appreciative that such an esteemed creative professional took me under his wing.
And yes, the first thing you ever told me – "‘You have to work hard to succeed as a model" ’- was certainly correct!

I would like to say that I am very thankful to two very talented individuals I have worked with lately and if anyone gets a chance to work with these two they should.
So big thank you to Abbey Callton, (makeup artist) a very talented young lady with great things to come from her, and to Stephen Bennett who is a great person, and a blessing to work with;  these two people have grown to become great friends.
100 percent love working with you, it is a joyful and a fun experience which brings out the real me, and I love it! Great work guys!